The P.J. above suggests height-of-misery. Intent of this blog is to bring out the S.O.S. (Save-Our-Soul) need to be an S.O.S.-Miser who INTELLIGENTLY saves for the sake of Planet. Because he knows if he saves, planet will survive-off global-warming & in-turn the life will. Checkout my other blogs and work at http://www.worldOFkaizen.com/

Can changing thoughts change a nation

That's what "Soch-Badlo-Desh-Badlo" means in Hindi (the national language of India)! Recently I saw telecast of this advertisement in Hindi in prime slot on TV.

How does one change her own thoughts and influence that of others?:
By listening to 'thought leaders'? Or
By watching 'leader's preaching' or what they 'practise' in real-life? Or
By watching promotional advertisements loaded with jingles and celebrities as  brand ambassadors vouching for it?

With the state of Maharashtra reeling under pressure of one of the worst drought years, DNA After Hrs newspaper decided to initiate a Water-less Holi Campaign. The film industry in their own symbolic way came out with their commitment in support of the cause.

Good job done DNA. Although symbolic, involvement of film-stars (and cricketers) does attract readership as well as some commitment of few of their fans to such initiatives.

Some self-starters do take such initiatives as commitment to self. But how to get that of others? How to get masses to change their thoughts and convert those into actions? Are such campaigns backed by promotional advertisements enough to make a real impact?

Usually most campaigns turn out to be flash-in-pan in grabbing attention. They fade away with 'the day' in spite of their prohibitively large promotional budgets.

To counter this, a most expensive way is to let a crisis erupt (as has already happened in case of water, food, fuel, power, etc.) thinking that innovations and inventions would happen as a necessity.

Another way is to provide a recognition platform in order to recognize improvement actions that prevent crisis.

The latter is proactive and proven one. Continuity is an essential feature so that proactive as well as reactive improvement attitude is nurtured in right direction as also is arrested from fading.

The continuity is specially important for larger causes of national interest. For instance, saving water the known nectar is not only national but a global cause.

So, knowing it's link to Holi the Indian festival of colors, how about media providing Holi-day as a yearly scheduled platform to individuals as well as entities like business houses, housing societies, educational institutes such as schools/colleges, etc. On the platform they can publish their innovative water-saving practices (actions) that they already performed at personal, public or professional level during last year.

Remember the platform is for practices i.e. for actions-already-taken. It is not for generating ideas. Ideas often evaporate because people have them in abundance but for someone else to implement.

Very often CEO of an entity gets so much obsessed with newer ideas and her administrators get so much busy and bureaucratic with installation and enforcement of laws and regulations to 'choose-ideas' from that that both forget to build culture that enables nurturing their implementation.


As a result not only the ideation process gets killed but also a few ideas that might emerge as implementable stay un-implemented.

Very often CEO-involvement does not go beyond 'storming' stage of 'brain' for newer ideas. It hardly reaches 'storming-the-hands'. As a result, in absence of culture-that-nurtures, there is diarrhea-of-ideas and constipation-of-implementation as they say.

Of course, there should be a separate idea-platform as a sequel in order to systematically improvise (PDCA) and scale-up (SDCA) the practices declared on action-platform. Both the platforms together should build a knowledge-bank concerning 'the cause' under consideration.

The action-platform as above may be backed by organizing similar platforms at the level of individual entities referred above where (in a designated few minutes) anyone can declare, demonstrate or show multi-media visuals of the right practices implemented in past towards the cause or theme.

Actually these practices are nothing but real-time innovations. Mostly they might be practised in crude-form autonomously while facing a typical adverse situation or while surviving a crisis.

Everyone in the audience intently 'listens' to & claps for EACH such practised behavior without ridicule or without discrimination. The celebration is irrespective of it's so-called success or failure and magnitude of it's impact on savings or benefits.

Celebration is more for the volume of actions that reflect values rather than value per-se. 'Catching' (rather providing platform to appreciate) people taking right-actions 'touches their hearts', enhances their self-esteem and thereby reinforces their thoughts that in the first place triggered right-actions autonomously.

'Catching' people taking lawful-actions (although one may argue "abiding by law is mandatory anyway") alongwith catching law-breakers for appropriate consequences may be warranted at least in case of strategic regulations needing enhanced compliance and positive attitude towards it. That in turn is likely to create a pull-effect on others to take right-and-lawful-actions and thereby imbibe or reinforce right thoughts.

The movement in turn is more likely to be self-supporting spreading to the neighborhood and to the nation unless continuity of the platform itself is broken. 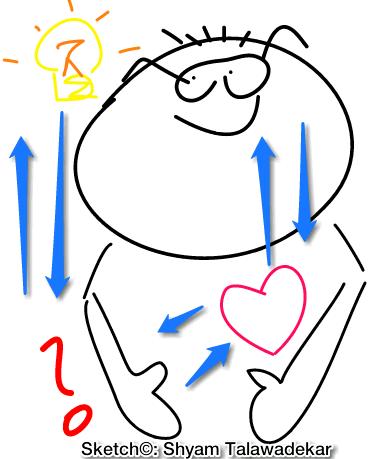 So the sequencing is:

1/ Autonomously-taken right-actions get captured. That creates 'feel-good' effect which in turn reinforces autonomous-thoughts that prompted 'actions' in first place although some of which might be 'inadvertent-failures'.

3/ Movement spreads to the neighborhood & across the nation.

(Concept from 'World-Of-Kaizen: A Total Quality Culture For Survival!' book of the author.)

Journey to internal world of change in thoughts (head) and feelings (heart) is more likely to succeed through external worldly-actions (hands) because they are easier to be sensed and felt. In that case, 'Soch-Badlo Desh-Badlo' slogan needs to be primed by 'looking for, catching and appreciating right-action/s' i.e. by Right 'Action-Pakadlo'.

Journey to mindset change i.e. journey to 'head' is less of mathematics and more of soft-intelligence: a mix of sequential & simultaneous expression through 'hands' (physical action) and 'heart' (emotional involvement). It is one of give-n-take of respect. It is one of 'mutual-trust' that communicates that 'I am interested in learning from you' and 'I am not here to ridicule your mistakes'.


In this journey people-in-power need to protect people with right-and-lawful-actions: Protection from fear-of-failures (while experimenting), fear-of-others (whose inefficiency might get exposed), and fear-of-job-cuts if any as a result of improved productivity.

There is a world of difference between 'doing' and 'saying'. Saying "Respect-others-to-get-respected" or saying slogans "Change-your-thoughts, change-nation", etc. is easier.

In absence of institutionalizing a soft-mechanism such as above to appreciate and recognize right actions, shooting slogans and truck-loads of 'fire-fighting' kind of reactive solutions may not be adequate to change mindsets towards whatever may be the crises: Be that at local level on smaller causes such as to achieve 'Pot-Hole-Free-Roads', or be that at national level to achieve 'Hole-Free-Treasury-Pots'.

Developed economies, especially post-war Japan and few other south-east nations following in it's footsteps, focused upon similar such mechanisms under the umbrella of Kaizen-culture in order to engage and develop their human resource by their 'Right-Action-Pakadlo' process before expecting result in the form of 'Soch-Badlo Desh-Badlo' to happen.

Latter was the effect of the former being firmly grounded in-place as the cause (the-Karma) created unbeatable innovation-factories there such as Toyotas and Hondas!
PDCA is Plan-Do-Check-Act improvement cycle.
SDCA is Standardize-Do-Check-Act cycle for sustenance and scale-up.

Strategise To Achieve Targets Daily
Old-Problems, New-Reasons !
Ant Knocks Elephant Down
Will It Work Here?
Can-changing-thoughts-change-nation?
In-big-problem-wear-hats-to-solve-it
Ridiculous Poison-culture versus Maverick Kaizen-culture
WOW Work-Culture: By Telling or Selling
IQ-EQ-or-SQ: What-is-more-important
Talent-Is-Latent: Enable It!
Judge If It's Paralysis-By-Analysis
Will It Work Here?
Suggestions On-Sale, None-To-Buy
Does recognition really matter
Who Comes First: Consumer Or Customer ?
Treat Root-causes, Not Symptoms !
ABCD of India Shining
Do You Ask Right Questions?
Am I 'Short-sighted' or 'Long-sighted'?